The University of Queensland and research partners Plotlogic Pty Ltd have developed new automated mining technology that, they say, will facilitate automation of the mining process while improving operating efficiency.

The research has shown how artificial intelligence can use scans of the mine face to almost instantly identify valuable minerals and waste rock, allowing each stage of the mining process to be planned more effectively in advance, UQ said.

“Each mineral has its own characteristic response to different wavelengths of light, so by scanning the mine face with our system we can map out the minerals present in the rock and their concentration (ore grade) almost instantaneously,” Professor McAree said.

This real-time mapping allows the mining process to be planned out before digging even starts, according to the researchers.

“Beyond this immediate efficiency gain, the enhanced ability to recognise ore grade could also underpin future autonomous mine systems,” Professor McAree said. “Machines equipped with this imaging system would be able to recognise ore grade as they were excavating it. Linked to artificial intelligence, this could allow automated machinery to operate in the mine environment, removing workers from hazardous parts of the mining process.”

Real-time ore grade classification at the mine face could also enhance mine scheduling and improve resource recovery and minimise processing waste, the researchers claim.

The project was supported by the Minerals Research Institute of Western Australia (MRIWA), with MRIWA CEO, Nicole Roocke, saying investment into research like this helped position Australia’s minerals industry at the leading edge of technology development.

“This imaging approach could prove particularly valuable where rapid extraction and consistency of ore grades could provide a competitive advantage to those leading the way,” Roocke said.

The project, which was conducted in 2018-2019, had a total grant value of A$850,850 ($653,322). In addition to MRIWA, UQ and Plotlogic, CITIC Pacific Mining and AngloGold Ashanti were also involved, hosting trials at the Sino iron ore and Tropicana gold mines, in Western Australia, respectively.

It was based off the OreSense® prototype system, developed to meet the needs of the research project, as well as offering a commercial pathway for early industry adoption of the technology.

“The prototype delivers a system capable of acquiring, processing and classifying hyperspectral data in the field and in real time, mapped to terrain and geo-referenced for integration with mine maps,” the project partners said. “In order to be the most general and applicable to all minerals, the hyperspectral imaging capabilities cover the visible to short wave infrared spectrum (400-2,500 nm). 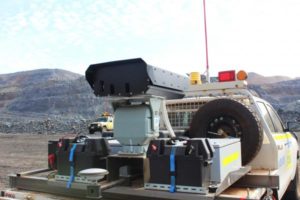 “The surveying capabilities of the system rotate in more than one axis to perform face scans and build a 3D data-cube from two individual line-scanning hyperspectral sensors. The system spatially and spectrally fuses the data cubes from the two sensors to provide a single data-cube for an entire scene. The system also performs on-board corrections and post-processing of the hyperspectral data to support real-time ore grade classification.”

The prototype used on site during the trials consisted of a sensor head with LiDAR and hyperspectral cameras, a pan-tilt unit and a GNSS receiver among other elements (see photo above).

SUEK says it has purchased six unmanned aerial vehicles (UAVs) with various modifications intended for aerial photography during surveying operations of its Kuzbass facilities, in the Kemerovo region of Russia.

The decision to develop the company’s fleet of UAVs was made after a test of aerial photography at SUEK’s open-pit mines in the Krasnoyarsk region and Buryatia, the company said. “After analysing the accuracy and detail of 3D terrain models obtained using UAVs, SUEK concluded that this technology could be used for surveying and land management in mining,” it said.

In August 2018, the Aerial Surveying Office was established as part of the technical directorate in Kuzbass. Today, the office is equipped with two Russia-made UAVs capable of making aerial photographs at a height up to 1 km, with a flight duration of two-and-a-half and four hours, respectively.

SUEK’s fleet also includes four compact DJI drones and a GNSS receiver that makes it possible to receive and process signals from all navigation satellite systems that exist today, it says. This latter device enables surveyors to locate UAVs during aerial photography.

Simultaneously with the procurement of equipment and staff training, the Aerial Surveying Office has made efforts to satisfy the requirements of the mandatory registration of UAVs with the Federal Air Transport Agency, to ensure compliance with legislation governing the use of Russian airspace, the process of aerial photography and the operation of UAVs, SUEK said.

The technology is helping the company solve a whole range of issues related to open-pit mining, such as evaluating the size of coal storage facilities, monitoring hazardous situations, updating topographic plans of work areas and surrounding territories, and monitoring the use of company land. The latter includes actual use of allotted land, the intended purpose of the land, reclamation, demolition control in buffer zones and property stock taking, the company said.

Anatoly Meshkov, Technical Director of SUEK-Kuzbass, said: “First of all, UAVs improve the efficiency and safety of surveying measurements and the accuracy of necessary calculations. We can now remotely control mining operations at almost any point and build digital enterprise models.

“Essentially, this is another step towards creating a ‘digital underground mine’ and a ‘digital open-pit mine’ to obtain the maximum amount of data for highly efficient management of coal production processes.”