National Group, through National Plant & Equipment, has supplied a Liebherr R 9200 excavator to an open-pit gold mine in western New South Wales, Australia.

The Liebherr R 9200 offers the biggest payload in its class with the 12.5 cu.m bucket capacity enabling sustainable performance and peak fuel burn efficiency in the most challenging conditions, according to the OEM.

Equipped with a Cummins QSK38 engine, with a rating of 810 kW at 1,800 revolutions per minute, the R 9200 is available powered by both diesel and electric motors. It can also be fitted with backhoe and face shovel attachments.

“The feedback from site is that the Liebherr R 9200 has been very well received,” Ackroyd told Australian Mining. “Our customers have been impressed with the performance of the Liebherr R 9200; it’s a very good machine and is competitive with other machines of a similar size and type.”

National Group is known across Australia for its dry hire of heavy earthmoving equipment. Working alongside Liebherr, it selected the R 9200 excavator for site, applying the joint understanding of the mine, the work being completed there and previous success using Liebherr equipment.

Liebherr-Australia Major Account Manager, Ben Kerr, explained: “Liebherr’s relationship with National, and understanding of the gold mine site requirements, allowed us to put forward the appropriate sized excavator and tailored bucket size to suit both National’s and site’s requirements.

“The addition of this R 9200 to National’s fleet further expands their range of mining equipment, building on the strong relationship and ease of doing business between the two companies.”

One of Western Australia’s key gold mines is trialling Austin Engineering’s new Ultima truck bodies on several of the operation’s 240 t haul trucks as it looks to optimise and maximise its haulage fleet payloads.

The trial has the potential to be converted into a fleet-wide body upgrade, according to Austin, continuing a program that started in 2014 when the engineering company fitted its JEC bodies and increased payload by more than 20 t/load at the operation.

The new Ultima body (pictured on a truck) will take the payload up to 240 t/load and further maximise the haul fleet’s availability and productivity, Austin said.

Going back to the previous payload increase program, the JEC bodies were fitted to the haul fleet after the mine identified a series of production-oriented challenges – including weight of the OEM bodies, the high cost of maintaining the bodies (and subsequent non-availability of the haul truck) and non-achievement of target payloads – impacting on performance and productivity of the load-haul fleet, according to Austin.

Initially 11 bodies were ordered and ultimately the mine’s load-haul fleet was retrofitted.

The customised bodies lifted payload capacity to 230 t/load – an increase of around 20 t/load over the OEM bodies – an outcome of the weight differential between the OEM tray and the JEC body. “Along with increased payload, the body change-out improved haul fleet availability and performance – the result of less frequent unscheduled body repairs, an outcome of the replaceable floor in the JEC body, which eliminated the need for heavy, maintenance-intensive wear line plates,” Austin said.

Now, with the trial progressing, the long-serving JEC units are in line to be replaced by the Ultima bodies which, due to further advances in the payload capacity vs body weight equation, will lift payload to 240 t/load and still meet all OEM dump truck specifications, according to Austin.

“The Ultima haul truck body has the potential to be a significant gamechanger in haul fleet operation due to its advanced steel and design technologies,” Austin said. “A lighter-weight module design, it features improved structural integrity for superior impact and wear resistance, extended fatigue life and lower maintenance costs – all targeted to maximised payload, improved cycle efficiency and significantly reduced total cost of ownership.”

A ‘V’ profile floor, designed to actively channel the load to the centre of the tray, improves machine stability and safety, according to Austin. The floor design also reduces dump cycle times (empty is achieved at 3/4 tipping).

Although the new tray is lighter and stronger than current OEM bodies – which translates to a 10-15% weight saving without sacrificing payload – its design reduces overall tray wear, which significantly increases availability and improves productivity of the mine’s load-haul cycle, Austin said.

The miner’s expectation of the Ultima body is for 240 t/load and, according to the manufacturer, when matched with the appropriate loading tool – such as the 32 m³ bucket on the mine’s shovel excavator – this load figure will be consistently and efficiently achieved.

Just as it did for the JEC units, Austin will maintain a condition monitoring program for the new bodies and advise the mine on any maintenance issues, it said.

The miner is also using Austin bodies in other operations around the world. Specialised hauler bodies have been customised to add significant value and reduce operational costs in underground mining operations, it said.

Kirkland Lake Gold’s Fosterville gold mine, in Victoria, Australia, has employed one of CSIRO’s innovative gold processing solutions to improve safety for workers maintaining the slurry mixing tanks at the operation.

Slurry mixing is an integral part of the Fosterville operation, CSIRO said. “Due to their configuration, conventional agitators tend to create dead zones in which there is little movement in the mixture, resulting in the precipitation and build-up of unwanted scale.

However, the possibility of pieces of scale breaking off and falling when the tank is drained, or when the agitator is removed for maintenance, creates a health and safety risk for employees cleaning and maintaining the tanks.

A meeting between technical teams from CSIRO and Fosterville identified Swirl Flow as a possible option to reduce the amount of maintenance required, according to CSIRO.

“Swirl Flow offered Fosterville Gold Mine superior mixing and suspension, while minimising problems associated with dead zones and sedimentation, and has since been installed at their operation,” CSIRO said. 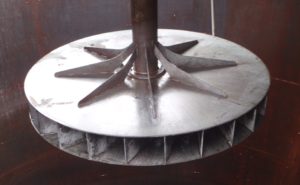 With an innovative, yet simple, impeller design, Swirl Flow creates a vortex, or tornado-like motion, in the tank, which prevents stagnant flow, while creating higher wall velocities to help cleanse the walls to reduce scale and build up in the tank,” CSIRO said.

Fosterville Gold Mine’s Technical Process Superintendent, Susan Mills, said: “For us, the driving benefit of Swirl Flow was the health and safety aspect. The safety of our people is paramount and the benefit of reducing the hazards of falling scale during maintenance made the decision simple.”

Mills said there other benefits.

“The actual conversion process is very straightforward and not costly to retrofit from a maintenance perspective, plus the reduction in scale build-up is anticipated to reduce operational costs incurred for cleaning,” she said.

A comparison suggests that, for a greenfields installation in the gold industry, Swirl Flow has the potential to be more cost effective than traditional systems, according to CSIRO. “It is cheaper due to its simple, light engineering design, and because steel baffle structures are not required. This lightweight design also means that retrofit costs are low to replace failed conventional agitators,” the agency said.

CSIRO Lead Scientist, Jie Wu, said: “Currently, companies tend to buy a complete processing system and not look at the individual components within that system to see if there are better alternatives.

“Processes and mixing applications vary from industry to industry, so we design a Swirl Flow system for the process or requirements of a producer’s particular processing, mixing or tank requirements.

“We look at the process, we model it and then we work with the manufacturer and the client company to optimise the performance of the Swirl Flow installation.”

CSIRO is looking to expand the applications of Swirl Flow and is interested in working with both producers and mining equipment technology and services supplier companies to help resolve operational mixing problems.

“We started in the alumina industry and are now making inroads with applications and plant trials in gold processing, uranium leaching and other minerals sectors,” Dr Wu said.

“We hope that Swirl Flow will become a mainstream alternative mixing technology for a number of applications in the minerals sector.”

Swirl Flow technology was developed with CSIRO partners at Queensland Alumina. The technology enhances the agitation process by mixing liquids and suspended solids to create a tornado-like vortex in a tank. It uses a motor, gearbox and a specially-designed radial impeller with a short shaft near the top of the tank. The system improves agitator reliability, resulting in reduced maintenance and shutdowns. Due to higher and more uniform wall veolcities, the scale formation rate is also reduced, according to CSIRO.

Power generation specialist Pacific Energy’s subsidiary, Kalgoorlie Power Systems (KPS), has secured up to a 6 MW expansion under its existing contract with AngloGold Ashanti Australia for its majority-owned Tropicana gold mine, in Western Australia.

An initial 4 MW is to be commissioned by December 2019 with a further 2 MW to be installed at AngloGold’s option, which would take the gas fuelled power station at Tropicana to 50 MW capacity.

The increased power is required for the Boston Shaker underground project at the Tropicana gold mine in Western Australia, an expansion project that will enable Tropicana gold production to be maintained at between 450,000-500,000 oz/y over the five years to and including the 2023 financial year, AngloGold and Independence Group (30% owner of the mines) said.

“The above organic contract expansions, together with the previously announced 6 MW expansion currently being undertaken for St Barbara and the soon to be commissioned new 5 MW Juardi power station, will see Pacific Energy bring an additional 17 MW of new power generation capacity on line by the end of this calendar year,” Pacific Energy said.

The company’s Contract Power subsidiary, as well as KPS, are both currently in discussions with several of their customers regarding other likely contract expansions.