Having weighed five scenarios for a Phase III expansion at the Island gold mine, in Ontario, Canada, Alamos Gold is proceeding with a plan to carry out a blind sink down to the 1,373 m level, build a paste plant, and expand the mill and tailings facility at the operation to boost production.

The company is no stranger to shaft sinking; its Young-Davidson mine, also in Ontario, has just had its Northgate shaft commissioned after Cementation used large diameter raiseboring technology to establish it as part of an engineer, procure and construct contract.

Yet, the shaft sinking route was not a foregone conclusion, with three of the five scenarios involving ramp haulage.

The Phase III Expansion Study, carried out with assistance from Hatch, Cementation, Airfinders, Golder, Halyard, SRK and DRC Estimating, looked at these scenarios using Deswik planning software to find further growth at the mine.

Having added 900,000 oz of the yellow metal to its reserve base already this year and hit a rate of 1,240 t/d in the March quarter (ahead of the nameplate 1,200 t/d rate), the company was keen to leverage these ounces at the same time as come up with a sound economic proposition for expanding and extending the mine. 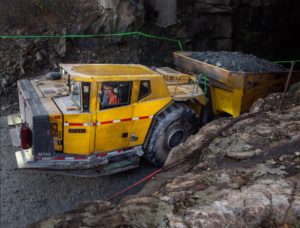 The company settled on expanding throughput to 2,000 t/d, from 1,200 t/d, through a shaft and paste plant build, explaining that this option presented the best economics.

As a result, the Phase III expansion will involve an initial blind sink down to 1,373 m, that new paste plant, and an expansion of the mill and tailings facility.

These investments, which would see the mine life double to 16 years from the eight years currently outlined in the reserve base, are covered in the total capital of $1.07 billion, which the company says is offset by the lower sustaining capital and operating costs of this scenario versus all that were evaluated.

Combined, this made for an after-tax net present value (NPV) of $1.02 billion at a 5% discount rate, and an after-tax internal rate of return of 17%, using a base case gold price assumption of $1,450/oz.

“These are also the lowest costs of any scenario evaluated reflecting the significant productivity improvements, decreased ventilation requirements, increased automation, and higher throughput rates associated with the shaft,” the company said.

While the company did not spell out what automation elements would be included in this expansion, on a webcast discussing the results, Chris Bostwick, VP, Technical Services, included details of an LTE network underground installation at Island as one continuous improvement project for 2020.

An Alamos Gold spokesperson later confirmed to IM that the LTE network was in the process of being installed with the project expected to be completed by the end of this year. “The network is primarily being installed for voice communications and real-time data gathering,” the spokesperson said.

Asked whether it was a pre-cursor to the use of autonomous haulage at the operation ahead of the expansion, the spokesperson replied: “We don’t have any firm plans for increased automation of our mobile equipment currently, but are actively monitoring the progress with the technology and this remains a potential down the road.”

With regards to automation within the expanded mine scenario, the only aspect currently being considered is the automation or tele-remote operation of the rock breakers and skipping, the spokesperson confirmed.

“Some of the trucking requirements could be automated down the road as noted above,” the spokesperson said. “The shaft expansion will make the entire operation more automated and productive.”

John A McCluskey, President and Chief Executive Officer of Alamos Gold, reviewing the study, said Island Gold had proven to be a “tremendous acquisition” for Alamos.

“We acquired Island Gold in 2017 at a cost of approximately $600 million when it had 1.8 Moz of mineral reserves and resources,” he said. “This high-grade deposit has more than doubled to 3.7 Moz and we expect further growth yet.”

While the planned expansion would make Island more profitable through increased production and lower costs, it would also “best position the operation to benefit from additional exploration success”, he said.

Long-hole open stoping will continue to be utilised as the primary mining method at Island, however, increased development and key infrastructure changes including the addition of a paste plant and shaft will allow for mining rates to increase to 2,000 t/d, it said.

The addition of paste fill underground will allow for faster stope cycling, thereby supporting higher mining rates and providing increased geotechnical stability, according to Alamos. It will also increase mining recovery, resulting in an additional 100,000 oz of gold recovered over the life of mine (from existing pillars). This represented an in-situ value of $145 million at a gold price of $1,450/oz.

The paste plant will have a capacity of 2,000 t/d and capital cost of $34 million with the plant expected to be completed in the December quarter of 2023, Alamos said.

When it comes to the shaft options, which Alamos Gold evaluated with the help of Cementation, it was decided that a conventional blind sink methodology would be used to provide “improved schedule reliability with minimal impact on existing operations”.

A combined raisebore from the 840 m level, and blind sink option below the 840 m level was evaluated, however, this option would significantly impact existing operations, Alamos said. “The cuttings from the raisebore in the upper mine, and waste generated from the conventional sink in the lower mine, would displace underground throughput capacity and significantly reduce mining rates below 1,200 t/d by as much as 400 t/d over the next several years,” it said.

The settled-on option will see a 5 m diameter concrete-lined shaft constructed with a steel head frame. The shaft will house two 12 t skips in dedicated compartments for ore and waste movement and a double-deck service cage for the transport of personnel and materials.

The company estimated an overall shaft sinking rate of around 9.6 ft (2.9 m)/d, which included a ramp-up period.

While the shaft will be sunk to an initial depth of 1,373 m, the hoisting plant will be designed for an ultimate depth of 2,000 m providing flexibility to accommodate future exploration success, the company said.

The underground ore and waste handling and loading pocket will be a conventional configuration like that of Young-Davidson, the company said.

Once skipped to surface, ore will be trucked to the expanded mill circuit.

On top of the payback being sweeter for the shaft expansion, ventilation requirements are also lower than under the ramp scenarios given the significantly smaller mobile fleet, Alamos said. This allows the shaft to serve as the only new required fresh air source.

The total construction capital for the shaft installation including all supporting infrastructure is anticipated to be $232 million.

Further, 56% of tailings will be placed underground reducing tailings dam raise requirements, a capital saving of $13 million, according to Alamos. 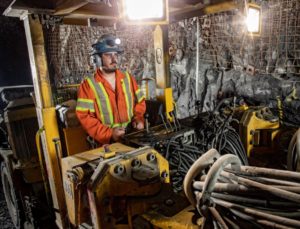 “This contributes to the lower ventilation requirements with the shaft expansion, and significantly lower diesel usage and greenhouse gas emissions,” the company said.

The mill expansion will include upgrading the crushing circuit, adding a second parallel ball mill, and a new elution and carbon in pulp (CIP) circuit with carbon screens. The total cost of the mill expansion is expected to be around $40 million.

The flowsheet of the new circuit includes upgrades and expansions for the following major process operations:

Mill recoveries are expected to average 96.5% over the life of mine, consistent with the historical performance of the existing operation, it said.

To accommodate the increased electricity requirements with the larger mill and shaft, the power line to site will be upgraded at a cost of $14 million, it added.

Despite the backfill options with the envisaged paste plant, an expansion of the existing tailings impoundment area is underway and required under all scenarios to accommodate the growth in the deposit over the last several years, Alamos said.

“With two planned future raises beyond 2020 and the addition of the paste plant, the tailings facility has sufficient capacity to accommodate existing mineral reserves and resources,” it added.

GR Engineering Services has been awarded additional work by Saracen Mineral Holdings at the Thunderbox and Carosue Dam gold operations in Western Australia.

The contract additions, which have a combined value of A$29 million ($19.9 million), include an engineering, procurement and construction contract for the Thunderbox Paste Plant project and an approved variation of the Carosue Dam Operations Plant Expansion project.

The Thunderbox paste plant work will involve the design, supply installation and commissioning of a new 150 m3/h paste backfill plant at Thunderbox. The project includes work at the existing Thunderbox operations’ (pictured) processing facility along with works at a new remote paste plant location. The contract price is A$22 million. GR Engineering says work will start immediately and is expected to complete in the first half of 2021.

At Carosue Dam, meanwhile, GR Engineering has been awarded a variation under the existing contract to install a paste pump at the Karari Paste Plant to distribute paste to the Whirling Dervish underground mine. The value of the variation is A$7 million.

These additions come on the back of being awarded a contract to carry out the engineering design, procurement and construction of expansion works on Saracen’s mineral processing plant at Carosue Dam, in November.

GR Engineering’s Managing Director, Geoff Jones, said: “GR Engineering has now worked with Saracen on three key projects in the last two years and we look forward to continuing our strong working relationship with one of Australia’s leading gold producers.”