Eldorado Gold’s underground mining battery-electric vehicle journey is set to begin next month, with the company imminently awaiting the arrival of a Normet SmartDrive concrete transportation vehicle at its Efemçukuru gold mine.

The company has reviewed the potential for the use of battery-electric vehicles at its Lamaque underground gold mine in Canada in the past, but this is the first official trial of zero emission mobile equipment the company will conduct. This aligns with the company’s recently announced target of mitigating GHG emissions by 30%, from 2020 levels, by 2030 on a ‘business as usual’ basis; equal to approximately 65,000 t of carbon dioxide equivalent. To achieve this target Eldorado is focused on pursuing decarbonisation through four key pathways including: measuring and monitoring; operational efficiencies and continuous improvement; technologies, processes and energy generation; and energy procurement and strategy.

Set to arrive at the mine, in Izmir Province, western Turkey, at the end of the month, the Normet Utimec MF 500 SD transmixer will be tested in a combination of ramp and flat drifts over the latter part of April.

Efemçukuru, a high-grade epithermal deposit, will provide a good test for the machine. While reasonably shallow in terms of depth, the narrow-vein mine has four declines (SOS, MOS, NOS and KBNW), each covering approximately 400 m of strike extent. These declines have 15% inclination, while flat drifts with inclinations ranging from 0-5% will provide a good platform for overall speed.

A spokesperson for the gold miner told IM that the machine, which has already been purchased, will be tested against assumptions provided by the manufacturer for rates of charging and discharging. The machine is then intended to be used in an operational capacity.

“Battery charging rates will be tested for charging from the existing grid, from a quick charging station and from downhill braking,” the team leading the project said. “Moreover, the battery usage rate will be tested for driving in uphill (15%) and flat (0-5%) galleries, against assumptions.”

Testing will also involve the comparison of performance of both battery-electric and diesel machines in uphill tramming, with the company expecting the battery-electric transmixer to outperform the diesel-equivalent in these head-to-head tests due to the machine’s high torque. 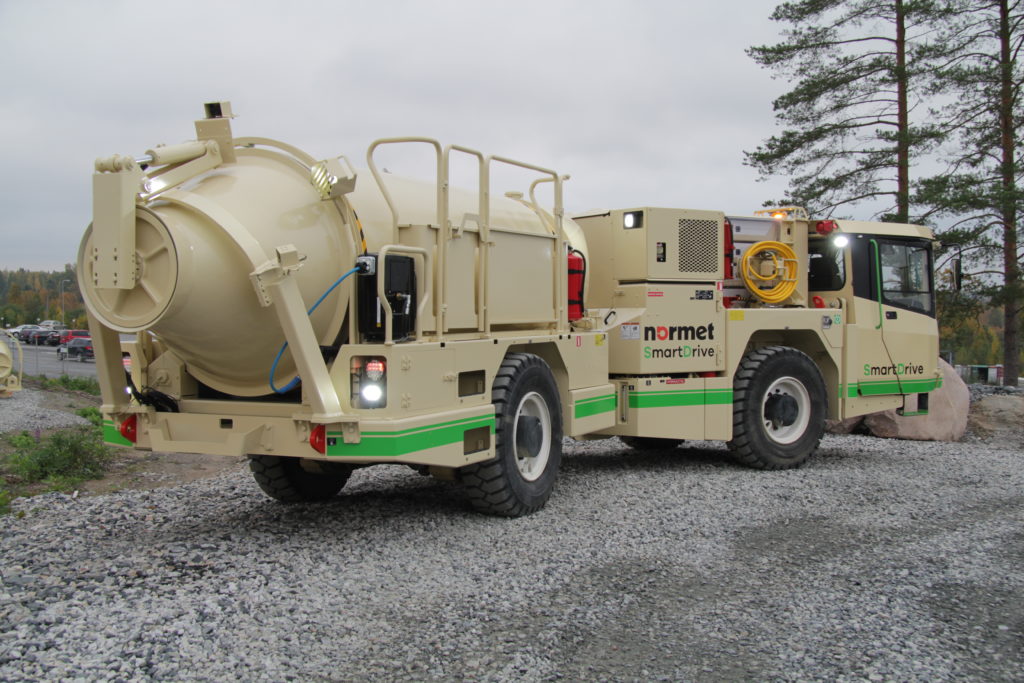 The Utimec MF 500 Transmixer SD (pictured here at Normet’s outdoor test track at its Iisalmi factory) has a 4.4 cu.m concrete carrying capacity, and comes with a combined power rating of 200 kW alongside a maximum tramming speed of 20 km/h.

Normet says the machine is designed for fast and safe concrete transportation in underground mines and tunnels where the tramming height is at least 2.4 m. The concrete drum rotation is electrically controlled and the speed ranges between 0-13 rpm.

Tested at both the Normet factory and the First Quantum polymetallic Pyhäsalmi mine in Finland, the MF Transmixer 500 SD has displayed a payback period of 2-3 years based on the machine completing a two-hour cycle that involves a 3 km journey on a 1:7 decline running at 15 km/h with the bowl rotating, one hour of unloading with the bowl rotating at 15 kW, and an uphill unloaded haul of 3 km at 10 km/h with no bowl rotation.

Eldorado said the MF Transmixer 500 SD will be at the mine site shortly, with training coordinated by Normet taking place in April ahead of the trial.

OZ Minerals has become the first miner in Australia to take delivery of a battery-powered Normet Charmec MC 605 VE SmartDrive (SD), with the unit arriving at its Carrapateena copper-gold mine in South Australia last month.

In a post on LinkedIn, the company said of the machine: “It is Australia’s first battery-powered vehicle for underground explosive charging and emits zero local emissions.”

Back in June 2019, Normet made history by, for the first time in Europe, demonstrating battery-electric emulsion charging in a production environment underground at the Pyhäsalmi mine, in Finland, with its Charmec MC 605 VE SD.

This followed the launch of its SmartDrive battery-electric vehicle architecture at Bauma in Munich, back in April 2019.

According to Normet, battery-based charging makes the explosives charging process safer and more efficient, as there is no need to plug in to the mine’s electric grid.

A prefeasibility study on an expansion of Carrapateena, released in June, included a trial of electric light vehicles and establishment of a renewable energy hub.