The proposed underground mine, a joint venture between Rio Tinto (55%) and BHP (45%), has the potential to be one of the largest producers of copper in North America – supplying up to 25% of US copper demand each year.

Stantec has been a lead underground mining and infrastructure consultant on the Resolution project since early 2019. It will assist the company by providing engineering and execution planning services for the mine.

Mario Finis, Executive Vice President for Stantec’s Energy & Resources business, said: “Resolution Copper is mining a critical resource needed for the energy transition. We are proud to support our client in this important endeavour with a strong commitment to sustainable mining throughout the entire life cycle of the project.”

Stantec’s engineering services on this project include power distribution, material handling, shafts and hoisting systems, dewatering/pumping, communications and more. Additionally, Stantec is evaluating the use of battery-electric vehicles to help the mine meet its goal of zero carbon emissions.

To date, more than $2 billion has been spent to develop and permit the project, including reclamation of the historic Magma Copper Mine site, sinking a second shaft to mining depth, rehabilitating an existing shaft and deepening to mining depth, extensive drilling and orebody testing, and the federal approval and public engagement process.

Stantec says its Mining, Minerals, and Metals team is helping clients achieve net zero mining – through its holistic service offering, Sustainable Mining by Design™, which aids companies to meet their environmental, social and governance obligations by finding ways to reduce energy demand and use clean sources of energy.

Native American communities in eastern Arizona, USA, look set to benefit from a new source of clean drinking water through a project sponsored by Resolution Copper and Stantec to deploy innovative renewable “hydropanel” technology, the mine developer says.

Resolution Copper and Stantec are partnering with White Mountain Apache community members to provide 64 hydropanels on the Fort Apache Reservation and supporting hydropanel installation programs in other Native American communities.

White Mountain Apache Tribe District II Councilman, Jerold Altaha, said: “Water is valuable; it’s the life force of humanity. Thanks to this wonderful opportunity with Resolution Copper, our community of Carrizo will have access to safe, clean drinking water. Due to high levels of manganese in the main water wells, our community has had to depend on portable water tanks as a means to obtain drinking/cooking water for years. The hydropanels will now enable us to draw water from the air which will provide up to 10 litres of water or about 20 16 oz bottles a day, at no cost to the family. We are grateful for these opportunities which continue to make a difference in everyday life for our people and community.”

Stantec Water Business Operating Unit Leader, John Take, added: “We are proud to be a part of this effort to provide safe, reliable drinking water to the Native American communities in eastern Arizona. Innovative and renewable methods such as the hydropanel technology are playing an increased role in helping solve these complex problems in a sustainable manner.”

Hydropanels are a one-of-a-kind renewable water technology that uses the solar energy to provide a safe and consistent supply of drinking water by drawing pure, constantly replenished water vapour out of the sky, according to Resolution Copper. The self-contained system converts water molecules in the air into liquid water, which is collected and mineralised in a reservoir inside the panel, creating high-quality drinking water that can be delivered directly to homes, businesses, and community distribution centres.

Resolution Copper Project Director, Andrew Lye, said: “Water is a fundamental resource, and many members of our neighbouring Tribes do not have reliable access to safe drinking water. Projects like the hydropanel deployment will help alleviate some of the burden, and make a difference where it matters most. Resolution Copper continues to look for ways in which we can work in partnership to be part of the solution and support the communities around us.”

So far, Resolution Copper has invested nearly $2.8 million through partnerships and donations to projects with Native American Tribes and other communities in the Copper Corridor in 2021.

The Resolution Copper project is a proposed underground mine 96 km east of Phoenix, Arizona, near the town of Superior. The project is a joint venture owned by Rio Tinto (55%) and BHP (45%).

To date, more than $2 billion has been spent to develop and permit the project, including reclamation of the historic Magma Copper Mine site, sinking a second shaft to mining depth, rehabilitating an existing shaft and deepening to mining depth, extensive drilling and orebody testing, and the federal approval and public engagement process.

Resolution Copper says, after completing the two-year-long rehabilitation phase of the underground mine, in Arizona, it is ready to move to the deepening phase of what could end up being one of the biggest copper mines in the world

Resolution, owned 55:45 by Rio Tinto and BHP, is the owner of the massive Resolution copper project.

In a project update, the company said the proposed mine continued to make progress on all fronts.

“Resolution Copper recently reached a key milestone in its development, with other critical work on track for completion in the near future,” the company said.

Work is progressing on schedule to deepen the historic No 9 shaft, originally constructed in 1971, according to the company. The project scope consists of rehabilitating the shaft, sinking it to approximately 2,086 m and linking it with the newer No 10 shaft completed in 2014.

“Connecting the shafts will enhance safety and establish the basis for developing towards the copper deposit,” Resolution said. “The shaft connection will provide a second egress route between the two shafts and improve ventilation.”

The No 9 shaft deepening project has made significant achievements over the last three months, according to the company.

“Following successful cleanup of the existing shaft bottom in December 2018, the shaft crew proceeded to outfit the 4,000-ft (1,219-m) level with a bulk air cooler that will chill the intake air for the No 9 shaft sinking,” Resolution said.

“The crews sinking the shaft use a Galloway work stage (pictured), which allows the miners to do their work with a high degree of automation, withdraw during the blast, and then quickly return to the bottom and repeat the cycle.”

The five-deck work stage has four jumbo drills, two shaft mucking machines, a concrete pouring system, and all the tools needed to advance the utilities (pipelines, electricity, etc). The Galloway used to complete the shaft rehabilitation was also removed from the shaft to make room for the sinking Galloway, which is specially designed to support the deepening work, according to Resolution. 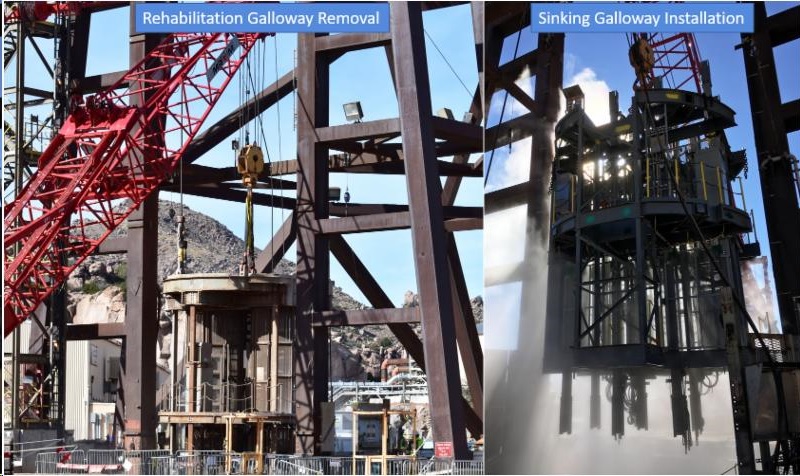 “Removal and installation of these Galloways involved technically complex lifts with multiple steps that were well planned for safe and efficient execution,” the company said.

Another significant achievement was the successful phase-1 commissioning and testing of the emergency generator system, Resolution said.

“In the event of a site power outage, the addition of these generators provides the ability to operate the auxiliary hoists for both No. 10 and No. 9 shafts and to restart the necessary refrigeration, ventilation and pumping to maintain the infrastructure at Temporary Pump Level 2,” Resolution said.

Looking forward, the project will focus on surface setup and shaft services work to support the sinking, completing the infrastructure installation on the 4,000 level, which is underway, and finishing the Oak Flat substation transformer upgrade, Resolution said.

The proposed underground block cave mine at Resolution is expected to become the largest copper mine in North America, capable of producing nearly 25% of US copper demand each year. As at Codelco El Teniente, the mining method will be panel caving, which allows for the mining of very large relatively low-grade underground orebodies by dividing the deposit into smaller strips, or panels, so that the ore can be removed in a safe and efficient manner.

Resolution Copper will use a standard-gauge rail system that will allow bottom-dump railcars to be gravity-loaded with ore delivered from overhead chutes, according to the company. These railcars will be routed to the dump station above the underground crushing facilities. Resolution Copper will use electric semi-autonomous locomotives to pull the railcars. The rail system will be a looped configuration, with two parallel drifts spaced on approximately 18 m centres in the production areas.

In total, approximately 594 pieces of mobile equipment are expected to be employed, which includes the large LHD fleet for the extraction level, moving ore from the drawpoints to the ore passes.

The mine is expected to reach depths of up to 2,100 m and temperatures in excess of 70°C. Last year, Rob Atkinson, former Head of Productivity & Technical Support for Rio’s G&I team, said operating at such a depth meant it really had to be “a fully autonomous mine”.

The partners at the Resolution copper project in Arizona, US, are likely to look to automation to solve the problems that come with operating at depths up to 2,100 m and temperatures in excess of 70°C, according to a member of Rio Tinto’s Growth & Innovation team.

Rob Atkinson, Head of Productivity & Technical Support for Rio’s G&I team, said operating at such a depth meant it really had to be “a fully autonomous mine”.

Resolution is a joint venture between Rio and BHP, with the former owning 55% and the latter 45%.

The proposed block cave hosts one of the largest undeveloped copper deposits in North America, with a 1.79 Mt resource grading 1.54% Cu. When up and running, it is expected to operate at a rate of around 120,000 t/d, producing some 1,000 MIb/y (453,592 t/y) of the red metal. This would make it one of the biggest copper mines on the continent.

While sinking this, Cementation USA came across huge inflows of water and rock temperatures of up to 80°C, making excavation particularly tricky.

This is why haulage in the mine is likely to be carried out by autonomous equipment. According to a 2017 interview with then Vice President of Operational and Technical Support for Rio Tinto’s Copper & Diamonds business, Craig Stegman, autonomous LHDs could also potentially feed an autonomous ore handling system at the underground mine.

And, in addition to this, there is also the possibility of using battery-powered LHDs at the operation.

Stegman, at the time, said Rio was working with suppliers such as Caterpillar, Sandvik and Komatsu to create an alternative to vehicles that were tethered to an electrical connection.

The deposit, located 96 km east of Phoenix, near the town of Superior, is still some way off being exploited.

The Resolution Copper joint venture (55% Rio Tinto, 45% BHP) confirmed back in June that rehabilitation work at its No 9 Shaft was on track for completion in 2019. This shaft would then have to be deepened and connected to No 10 Shaft in 2021.

While the mine is likely to be autonomous, the operation is expected to employ some 1,400 direct employees as well as a further 2,300 contractors and other support roles, according to Rio.