SUEK says it has commissioned a new flotation unit at the Kirov coal wash plant in the Kemerovo region of Russia.

The technology, introduced at SUEK for the first time, maximises washing efficiency of coal fines (0-0.35 mm), producing a high-quality concentrate (calorific value over 6,600 kcal) with an ash content of 8-9% from a product containing 30-40% ash, the company explained.

With this unit, the output of commercial products will increase by 2.8%, boosting the annual concentrate production at the washing plant by 150,000 t. At the same time, the company will generate less waste, spending less on “waste release” (cake), transportation and storage, it said. This also solves environmental issues related to road transport within the city (dust, noise and pollutants).

This investment of $13.3 million comes on top of a $13 million investment the company made in high-tech water treatment facilities at the Kirov mine earlier this year.

“The company has adopted and runs a relevant long-term program. Technical re-equipment and modernisation enhance the production capacities of washing plants. Today, SUEK-Kuzbass is able to process 16 Mt of coal a year. Another way to achieve the quality indicators required by the market is to increase the processing depth of raw coal or use fine sludge (down to zero).”

He added: “Having commissioned the flotation unit at the Kirov washing plant, our company will effectively address this issue. In addition, the environmental situation in neighbouring areas will improve.”

Sibniicoal, SUEK’s Research Institute of Coal Beneficiation, completed all the design work for the flotation unit, with the project comprised of a flotation unit building, flotation reagent storage, a pumping station, a TP-103 transformer substation and a protective structure. The radial thickener building also underwent renovation.

SUEK spent about $6 million on new equipment for this new unit. Flotation machines, XJM-S28, and disc vacuum filters, Bokela Boozer, are at the core of the process cycle, it said.

The company says the unit can process sludge coming from two modules of the Kirov washing plant as well as from the old sludge sumps.

SUEK says it has purchased six unmanned aerial vehicles (UAVs) with various modifications intended for aerial photography during surveying operations of its Kuzbass facilities, in the Kemerovo region of Russia.

The decision to develop the company’s fleet of UAVs was made after a test of aerial photography at SUEK’s open-pit mines in the Krasnoyarsk region and Buryatia, the company said. “After analysing the accuracy and detail of 3D terrain models obtained using UAVs, SUEK concluded that this technology could be used for surveying and land management in mining,” it said.

In August 2018, the Aerial Surveying Office was established as part of the technical directorate in Kuzbass. Today, the office is equipped with two Russia-made UAVs capable of making aerial photographs at a height up to 1 km, with a flight duration of two-and-a-half and four hours, respectively.

SUEK’s fleet also includes four compact DJI drones and a GNSS receiver that makes it possible to receive and process signals from all navigation satellite systems that exist today, it says. This latter device enables surveyors to locate UAVs during aerial photography.

Simultaneously with the procurement of equipment and staff training, the Aerial Surveying Office has made efforts to satisfy the requirements of the mandatory registration of UAVs with the Federal Air Transport Agency, to ensure compliance with legislation governing the use of Russian airspace, the process of aerial photography and the operation of UAVs, SUEK said.

The technology is helping the company solve a whole range of issues related to open-pit mining, such as evaluating the size of coal storage facilities, monitoring hazardous situations, updating topographic plans of work areas and surrounding territories, and monitoring the use of company land. The latter includes actual use of allotted land, the intended purpose of the land, reclamation, demolition control in buffer zones and property stock taking, the company said.

Anatoly Meshkov, Technical Director of SUEK-Kuzbass, said: “First of all, UAVs improve the efficiency and safety of surveying measurements and the accuracy of necessary calculations. We can now remotely control mining operations at almost any point and build digital enterprise models.

“Essentially, this is another step towards creating a ‘digital underground mine’ and a ‘digital open-pit mine’ to obtain the maximum amount of data for highly efficient management of coal production processes.”

Immersive Technologies says it has seen strong demand from mining companies in Russia for its tailored workforce development solutions as equipment sales have risen in the past six years.

The proportion of global mining equipment being deployed in Russia was 22% in 2018, compared with 9% in 2012, with regional growth of 13% over the past six years, according to Immersive.

“As a result, the industry is demanding more skilled personnel,” Immersive said.

In line with this industry growth, Immersive is experiencing a surge in simulator and service sales, which have been proven to achieve safety and productivity improvements throughout all stages of the mining cycle, according to Immersive.

David Anderson, Executive Vice President – Sales and Support at Immersive Technologies, said: “It is an exciting time for mining in Russia and the Commonwealth of Independent States (CIS). We are proud to support this region in delivering the safest and most profitable operators. 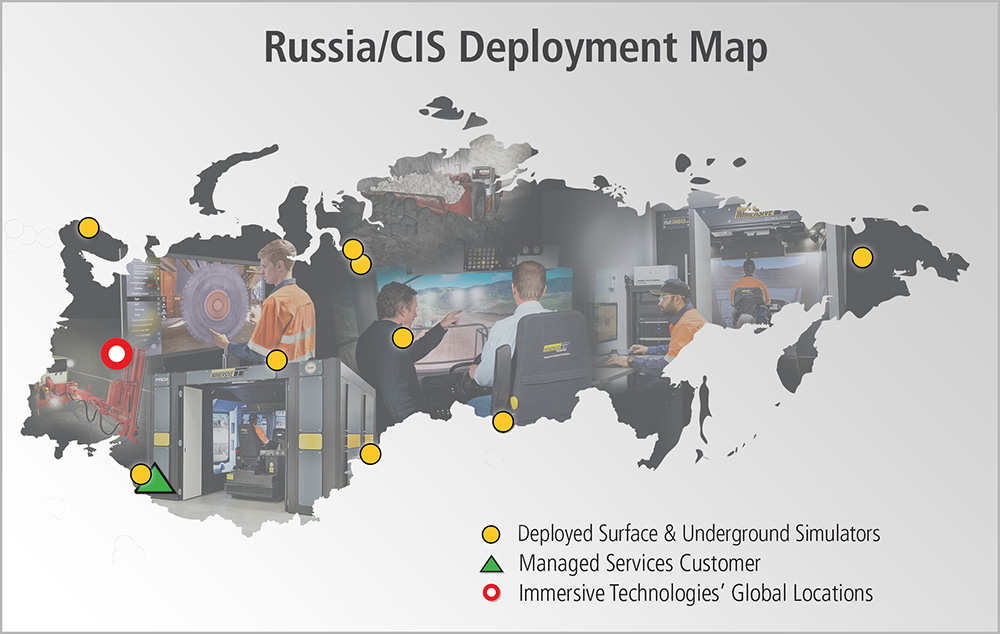 Immersive highlighted some results from this growth, with the following four customer case studies:

First, Vostochnaya Technica, a long-time customer, is implementing an Immersive simulator as a key part of delivering “mine assessments” to their customers, Immersive said. It is using a PRO4 Surface Mining simulator at one of the SUEK mine sites to improve truck and excavator operator behaviours. “The simulator will then move to a new mine site to assess truck operators and to make clear recommendations on equipment usage with the expected result of quantified productivity improvements,” Immersive said.

Second, a continuous improvement project aimed at enhancing operator skills is underway at Norilsk Nickel. Upon conclusion, the goal is to increase productivity, decrease cycle times, and reduce operator variability. The initial project focuses on underground LHDs but will likely expand to other equipment including bolters, according to Immersive.

Third, Komatsu CIS, in the Kuzbass region, will be using simulation to train new operators, along with assessing experienced operators to improve their skills. “Immersive Technologies will be providing support via our Training Advisor Team to meet their requirements and tailor curricula to their specific needs,” the company said.

Anderson concluded: “Russia and the CIS will continue to be a key market attracting increased investment from Immersive Technologies, over the coming years. We will be there to support the industry growth and needs of our customers.”

The new system is intended to minimise the number of employees involved in hazardous and dangerous work, while maintaining or even reducing drilling costs, VIST said.

The drill rig will have a pre-set for independent performance of most operations usually performed manually by the operator. It will be furnished with additional functions: motion control, environment scanning (including the possibility of remote presence), automatic testing of the installed equipment, high-precision positioning and emergency shutdown, as well as two-way data transmission, VIST said. At the same time, manual control from the cabin will still be possible in normal mode.

The equipment installed on the rig will include a system of environmental scanning sensors (short- and long-range radars, 3D light identification detection and ranging device) to ensure early detection of any obstacles, bunded areas or cliff edges, and will prevent collisions. A multi-level automatic testing system will prevent the failure of various elements, according to VIST.

VIST said: “It is anticipated that this innovative solution will significantly improve operational safety and efficiency in the Siberian mines, which rank among the world’s largest coal mining centres.

“Thanks to the new technology, it will be possible to move drills independently or in remote mode along the stack, drill shafts, assemble and dismantle the drilling assembly and level the platform. An algorithm will be used to determine the optimal sequence of drilling the shafts, taking into account their relative position and type of rock mass.”

The system will operate as follows: The drill operator will move the equipment to the required stack in manual mode. Another employee will then remotely set a drill plan for the rig in this area and engage the independent operation mode. At the same time, the system’s built-in safety algorithms will control the drill’s movement, taking note of the equipment and employees performing auxiliary work in the area. Personnel operating near the drill will be equipped with an emergency shutdown device, which, if necessary, will immediately stop the robotic equipment.

The operator will exercise remote control from his computer workstation located at the enterprise and, if necessary, will be able to quickly take control of the equipment during any process operation, such as in the event of complex non-standard situations. In this case, the digital system will actively help the human operator, warning of potentially dangerous factors while displaying the status and additional information.

Specialists will be able to remotely control the engines, compressors and controllers, moving, turning, mast raising and lowering mechanisms, assembly of the drilling unit, the braking system, drilling itself, etc. In addition, the dispatcher will deal with security issues such as the admission of equipment and people to the automated site.

“In general, however, the human role will be minimised, and if any intervention is required this will only be in rare specific cases,” VIST said.

“The automation systems themselves will cope perfectly well with the tasks. Satellite navigation and special drill control programmes that are activated when directly approaching a specific location will provide incredible pointing accuracy of up to 10 cm. The system will also develop routes for the drill’s movement between the wells, paying great attention to the optimal path and the absence of unnecessary actions and thereby minimising costs.”

The drill, without the intervention of personnel, will be able to level the platform and the mast independently with an accuracy of 1° in two planes, based on two-axis inclinometer readings, processing current data and generating commands to the alignment mechanisms on the basis of this data. Digital control of these mechanisms will be provided, and depending on their design, it will be possible to use mechanical actuators, electrical or control signals through the standard CAN industrial network.

A number of subsystems and algorithms will be created for independent drilling, according to VIST. In particular, a set of sensors for monitoring parameters (feed forces, rotation forces and speeds, gas-water mixture pressure, depths, etc) will be installed in the equipment, as well as a subsystem based on actuators and feedback sensors for assembly build-up and dismantling.

The robotic drill will fit into the enterprise’s existing data environment, VIST said. The existing MTC Karier management system will handle fuel consumption metering and reporting issues, with the newly developed solution becoming part of the Intellectual Karier system. This will make it possible in future to centralise control over several drills simultaneously, including simultaneous operation of these rigs in the same stack.

The company said: “VIST Group has no doubt that the automated solution being developed will prove its economic efficiency during the planned pilot operation and will significantly increase the safety of production processes.

“As we speak, experts are ascertaining the possibility of deeper digitalisation and more advanced operation of the enterprise, addressing all the challenges and tasks dictated by the new industrial revolution that is taking place before our eyes.”

SUEK is one of the world’s leading coal producers, the largest coal producer, supplier and exporter in Russia, as well as a leading heat and electricity producer in Siberia.

Delivery of all machines is scheduled for the second half of 2019.

Meanwhile, the Sandvik MH621 Roadheaders are equipped with powerful, geometrically optimised cutter heads, designed to continuously excavate roadways, tunnels and other underground caverns without using explosives. These electro-hydraulic machines cause no harmful vibrations and are ideal for mining coal and other soft rock minerals, according to Sandvik.