Safety, electrification, recycling and gold recovery tech to be shown at #Disrupt Mining 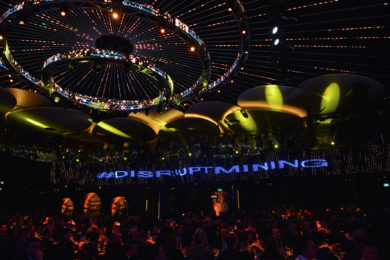 Goldcorp has announced the six semi-finalists that will display their ideas and technologies at the #DisruptMining Innovation Expo in March.

Commercial Pau, Envisioning Labs, ETF Mining, Gekko Systems, Hydrostor Inc and RubberJet Valley have made the shortlist and will showcase their technologies at the event on March 3 at the Rebel Entertainment Complex in Toronto, Canada.

The list will get even shorter when the three finalists are announced next month. This trio will pitch their ideas to a “shark-tank” style panel including Ian Telfer (Goldcorp Chair), Jacob Yeung (University of British Columbia student/#DisruptMining UBC Captain), Katie Valentine (Partner, KPMG Australia, Global Head of Mining Consulting), Sue Paish (CEO of Canada’s Digital Technology Supercluster) and Wal van Lierop (President and CEO, Chrysalix Venture Capital) at a live event held at the same venue on the same day in March.

“#DisruptMining offers innovators and entrepreneurs a platform to bring disruptive and exponential technologies to the mining sector,” Goldcorp said. “The panel of industry leaders will award one of the finalists the opportunity to negotiate a C$1 million ($753,655) investment in its technology, company or idea.”

Todd White, Chief Operating Officer of Goldcorp, said: “Look within Goldcorp and across the mining industry generally, you can see it – #DisruptMining is making an impact, spurring innovation, forging new partnerships and accelerating technological change. We’re looking forward to showcasing the semi-finalists and their technologies at #DisruptMining to continue to move innovation in our industry forward.”

Goldcorp, which has helped run this annual innovation challenge since launch in 2017, has invested over C$10 million in a range of new technologies and companies identified through the #DisruptMining innovation accelerator. “This funding has supported companies through the start-up phase into growth and scale-up,” it said.

The gold miner provided some more details on the six semi-finalists:

With the use of a patented biometric technology, Commercial Pau’s Digital Remote Lock Out System is designed to enhance safety and security on-site while reducing the amount of time required to effectively complete the lockout process, Goldcorp says.

Envisioning Labs has developed an innovative concept to reuse mine tailings to produce concentrated solar power reflectors. “These reflectors are then used to generate clean energy and sorbents to reduce pollution,” Goldcorp says.

ETF Mining’s Modular Mining Vehicles are fully electrified, digital and autonomous; offering improved efficiency and reduced environmental impact, according to the gold miner. “Their modularity allows for the adoption and integration of new technologies as they become available,” it added.

ETF Mining will also be on show at IM’s inaugural Electric Mine conference on April 4-5, 2019, where CEO Koen van Peteghem will present a paper titled: Ridding haulage of diesel: why only modular will deliver

Gekko Systems supplies innovative modular equipment and processing technologies focused on the recovery of gold. “It is introducing the development of a product, the OnLine Gold Analyser, which will help determine the actual gold content in mineral processing slurries and solutions in real time,” Goldcorp says.

The OnLine Gold Analyser was originally developed by CSIRO, before the research organisation signed an agreement with Gekko to commercialise the technology.

RubberJet Valley uses a proprietary high-pressure water jet that breaks down large truck and mining off-the-road (OTR) tyres in an environmentally-friendly way. The resulting material is then used to produce new tyres or other rubber-based products for commercial use.