Bemisa Holding SA has awarded Ausenco the Conceptual and Basic Engineering for the second phase of the Água Azul gold project in Pará, Brazil, the mine engineering and consultancy company says.

Applying its cost-effective design approach and extensive gold project experience in the country, Ausenco says it will design a 1.5 Mt/y gold processing facility.

Água Azul is in the southeast of Pará, close to the polymetallic district of Carajás, according to Bemisa, which said drilling surveys to define resources and reserves are in progress, together with bench tests and pilot scale tests.

Sandvik has recently delivered its first i-series truck to Brazil, with the 45-t payload TH545i heading to OZ Minerals Brazil’s Pedra Branca copper mine in Pará in the northern part of the country.

The model has automation features that bring more productivity and safety to the operation, according to Sandvik. Compared to its predecessor, the Sandvik TH540, the truck offers a significant capacity increase by carrying 5 t more. The truck’s standard engine power, meanwhile, increased to 450 kW, from 405 kW, to maintain the same speed with the increased payload.

Other equipment will be delivered to the Pedra Branca mine over the next few months, with, in all, five different models of drilling, loading and transport equipment making up the “modern and complete fleet”, Sandvik said.

The new fleet additions are all part of OZ Minerals’ ramp-up efforts at the underground mine, which is targeting increased mining from ore stopes from the June quarter onwards.

Vale says it is to start trialling autonomous haulage at its Carajás mine in Pará, Brazil, following a successful deployment at its Brucutu iron ore mine in Minas Gerais.

The company plans to run both autonomous and manned trucks at the operation, the world’s largest open-pit iron ore mine, it said.

Combined with a staff development and training plan at Carajás, the autonomous innovation aims to increase the safety of operations, in addition to generating environmental benefits and a competitive edge, Vale said.

Two autonomous trucks are expected to start the testing phase in an isolated area of Carajás mine by the end of November, but training of the operators began in October. In addition to autonomous haulage, three autonomous drills started operating in the mine last year, Vale said.

Vale explained: “In an autonomous operation, trucks are controlled by computer systems, GPS, radar, and artificial intelligence, and monitored by operators in control rooms located miles away from the operations, providing more safety for the activity. When risks are detected, the equipment shuts down until the path is cleared. Sensors of the safety system can detect larger objects, such as large rocks and other trucks, as well as people near the roads.”

Compared with conventional transport, productivity of the autonomous operation system is higher, according to Vale. “Based on the technology market data, Vale expects to increase the useful life of equipment by 15%. Fuel consumption and maintenance costs are also estimated to be reduced by 10%, and the average speed for trucks will increase,” it said. 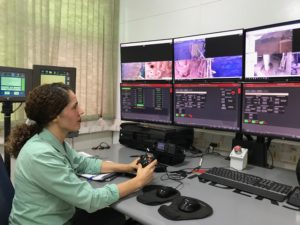 Autonomous operation also brings important environmental benefits. The reduced consumption of fuel by the machines results in a lower volume of CO2 and particulate matter emissions and less waste, such as parts, tyres and lubricants.

According to Antonio Padovezi, North Corridor Director for Vale, in addition to the safety factor, the use of autonomous equipment in Carajás will ensure greater sustainability for Brazilian mining. “It is another breakthrough with great economic, environmental, and social gains. It reduces employees’ exposure to risks, increases competitiveness, reduces emission of polluting gases and promotes professional training and development, following a natural trend experienced today in the market worldwide,” Padovezi said.

Implementation of the autonomous operation is combined with a staff development plan, which includes creation of a training centre in the city of Parauapebas by the supplying company. The plan is along the lines of Brucutu, where all conventional truck operators will be reassigned to other activities. At Brucutu, part of the team is managing and controlling the autonomous equipment while another part is taking on new “automation-related tasks”. Some employees have been reallocated to other areas.

Vale is deploying a digital transformation program as part of its Industry 4.0 developments.

This has allowed the company to increase productivity, operational efficiency, and safety, in addition to improving its financial performance and driving innovation, the company said.

Technological innovations developed by the company include the Internet of Things, artificial intelligence, mobile applications, robotisation, and autonomous equipment (such as trucks and drills).

The program will also support the strategic pillars presented by Vale this year – improve the company’s operational approach to safety and operational excellence as well as bring a positive impact to society, becoming a development facilitator for the areas in which it operates while promoting a safer and more sustainable industry, Vale said.

Horizonte Minerals has been awarded the construction licence for the development of its 100%-owned Araguaia ferronickel project in Brazil.

The award of the licence, called Licença de Instalação (LI) in Portuguese, was granted by SEMAS, the Brazilian Pará State Environmental Agency. It allows the London- and Toronto-listed company to construct the rotary kiln electric furnace (RKEF), processing plant and associated infrastructure, the company said.

Receipt of the permit follows release of the feasibility study (FS) in October 2018. This study envisaged a $443 million project able to produce an average of 14,500 t/y of contained nickel, within some 52,000 t of ferronickel. It also showed the potential for a doubling of production capacity to 29,000 t/y.

Jeremy Martin, CEO of Horizonte, said: “I am very pleased to announce the award of the LI for Araguaia as this is a major milestone for the company. Subject to funding, the company is now in a position to commence construction with the necessary environmental permits approved, including water abstraction permits issued in 2018 together with the newly issued LI.

“The LI award follows on closely from the completion of the FS, demonstrating that Araguaia is a Tier 1 asset with the potential to be a low-cost supplier of nickel in the form of high-grade ferronickel to the stainless-steel industry. Over the initial 28-year mine life, Araguaia is expected to generate cash flows after taxation of $1.6 billion and sits on the lower half of the global cost curve.”

Araguaia is in the southeast of the Brazilian state of Pará, some 760 km south of the state capital Belém. The project comprises an open-pit nickel laterite mining operation that mines 27.5 Mt of reserves over the mine life. The metallurgical process comprises a single line RKEF to extract ferronickel from the laterite ore.

The RKEF plant and project infrastructure will be constructed over a 31-month period. After an initial ramp-up period, the plant is expected to reach full capacity of approximately 900,000 t/y of dry ore feed.