TOMRA Sorting Mining believes its sensor-based ore sorting solutions have a role to play in the new circular economy, helping miners reduce their impact on the environment while remaining profitable.

Last March, the European Commission announced its Circular Economy Action Plan as one of the main blocks of the European Green Deal. This new EU action plan promotes the idea of a circular economy and fosters sustainable processes along the entire lifecycle of products, aiming to ensure the resources used remain in use for as long as possible.

The plan focuses on the sectors that use most resources and where the potential for circularity is high, many of which rely on the mining industry for their raw materials, TOMRA says.

“Mining will play a vital role, as primary resources will continue to be needed due to the growing population and rising per capita consumption, and because it is impossible to close the loop,” the company explained. “They are also used for modern applications in energy production and high-tech products.

“In addition, the sustainable development goals that the United Nations have set up for 2030 are driving the development of green technologies that use a variety of minerals. Mining companies will have to adapt as their customers shift to a circular economy approach, and they will have a key role to play in this transition.” 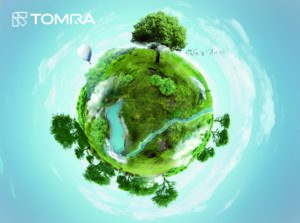 The development of a circular economy in mining presents both challenges and opportunities for mining companies. It has the potential to address the shortage of mineral resources, waste of resources and environmental pollution while generating economic benefits, according to TOMRA.

“The circular-economy approach prioritises reusing materials over extracting new raw materials,” it said. “However, the need for virgin materials remains, and wherever they are used, their footprint should be as small as possible.”

In order to reduce the footprint of the products they offer, mining companies will need to find ways to maximise the efficiency of their operations and to minimise the use of energy and other inputs, while reducing waste as much as possible.

Dr Mathilde Robben, Key Account Manager at TOMRA Sorting Mining, said: “Climate change and the pursuit of sustainable energy are shaping the global economy of the future, driving the transition from a linear to a circular economy model. The mining industry is already adapting and shifting towards a Green Mining approach.

“As a large consumer of energy, water and chemicals, it is a prime example of a sector where much can be done to reduce the impact on the environment. However, it is vital that it achieves this move towards sustainable practices without losing sight of profitability.”

This is where TOMRA’s advanced sensor-based sorting technologies, using sensors such as X-ray Transmission (XRT), come into play.

Dr Robben continued: “TOMRA’s advanced sensor-based sorting technologies address the main challenges the mining industry faces today, such as declining head grades and increasingly difficult to access orebodies, rising energy and labour costs, and increased environmental liability, while providing a highly cost-effective solution for mining operations to participate in the circular economy and make the most of the new opportunities it brings.”