Driving out capital expenditure and standardising IIoT infrastructure have been the two key pillars propelling Maestro Digital Mine forward, and, 10 years after its formation, these two drivers are on show with its latest launches at the SME MineXchange Annual Conference & Expo in Salt Lake City.

Over the last decade, the company has become synonymous with improving underground mine ventilation safety as well as reducing blast re-entry times, with an offering that includes air quality stations, automated regulators, and “fail-safe” LED displays. Yet, Maestro’s core is IIoT devices and last mile digital networks for underground mines.

Michael Gribbons, CEO and Co-founder for Maestro, says the company’s production of “IIoT solutions” pre-dates the popular use of this acronym, with its big launch in Salt Lake City set to take Maestro into new “edge-based” territory that will allow it to cope with multiple communication protocols or artificial intelligence-led process miners look to leverage over the next decade.

He explained to IM: “We have re-envisioned and redesigned both our hardware, embedded firmware and external software to allow greater flexibility and capabilities for today and the future; the platform, if you will.”

This current hardware platform has, among other things, underpinned the success of its Vigilante AQS™, which was created to solve applications for mine ventilation monitoring and control.

“Every year, Vigilante customers kept asking for different capabilities, and we have said yes to these requests until we couldn’t.” Gribbons said. “We ran out of hardware space – we just couldn’t do the things the clients were asking anymore, forcing a major platform redesign that is now shipping.”

This constant cycle of improvement has already led Maestro into the realm of dust monitoring and regulator control. It also saw the company devise products and solutions that eradicated the need for expensive PLCs, customer panels and fabrication. Its plug-and-play philosophy, in turn, has reduced the amount of engineering required to install and monitor these solutions.

“For example, legacy analogue actuators are now being driven out of the equation by coupling ModuDrive™ actuators to automate regulators allowing significant capital expenditure reductions and improved diagnostic monitoring by using edge-based embedded IIoT technologies,” Gribbons said. “The mining industry is following other industries by applying modular construction where proven solutions can be selected and applied instead of the typical one-time custom engineering design and build where individual components are collated and customised on an individual basis. The main advantages of applying modular construction is schedule acceleration and capital expenditure reduction.”

Gribbons sees the new platform – a combination of hardware, user interface, on-premise and cloud-based software allowing data to be stored and trended by the customer as they choose – being able to take advantage of “true edge-based technology” to make better and quicker decisions.

The new platform installed on the Vigilante AQS, SuperBrite™ Marquee display, MaestroFlex™ regulator and ModuDrive actuator are on display at the SME conference.

Looking past the fixed automation infrastructure Maestro has made its name on, the company is now embedding its expertise into more mobile solutions that the industry has been taking a liking to, namely drones and unmanned robots.

Also featured on the Maestro stand – and the Exyn Technologies stand – at the event is an aerial drone with a Maestro gas monitoring IIoT device fitted on it. 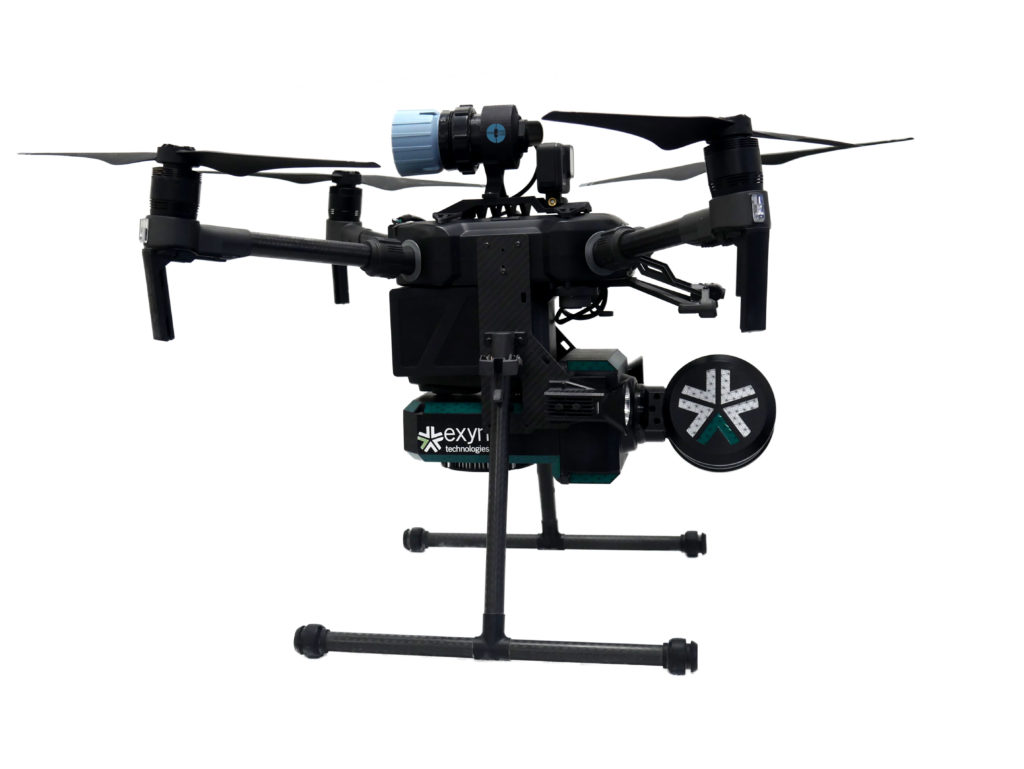 This new gas monitoring drone, which will integrate critical gas sensors onto the ExynAero™ and ExynPak™ platforms, is, effectively, the “quickest and safest mobile gas monitor on the planet”, Gribbons remarked. “The drone is able to automatically launch and log targeted gases directly on the point cloud in any confined area without deploying mine rescue personal with Scott Air-Paks. Again, we are improving worker safety and accelerated time to obtain accurate data in emergency conditions or for more granular data at the headings for reducing blast re-entry times.”

Powered by ExynAI’s multi-sensor fusion capabilities, gas sensor readings are captured while the robot is in flight and displayed in real-time via a ruggedised tablet, Exyn explained. These sensor readings are saved with precise coordinates in a high-fidelity point cloud that can be exported and examined in a variety of mining software.

These mobile applications will remain a minority interest for Maestro, but it offers the company another way to influence the underground mine safety dynamic and ensure it stays loyal to its “we leave no one stranded” brand promise.

Such collaborations are nothing new for Maestro. Just last year, it teamed up with Howden to integrate its IIoT solutions into the Ventsim CONTROL ventilation optimisation software, while, in 2020, it brought the Plexus PowerNet™ last mile communication network to MacLean Engineering’s Sudbury test mine and Dynamic Earth’s educational mine to enable continuous connectivity underground.

Gribbons said the company has also just worked with Spain-based Zitron on designing large 4 x 4 m MaestroFlex™ regulators on underground booster fans at a major gold mine in Canada.

All these partnerships are part of the company’s recipe for success.

“We’ve progressively eliminated elements of underground mine automation infrastructure to simplify and allow for the future automation of mining,” Gribbons said. “This is working; the clients continue to return, and we stay true to our core purpose of enhancing lives by the pursuit of productivity and safety excellence.”