Close to four years after release, Weir Minerals Vulco® 67 rubber compound is providing exceptional wear life and reliability in mill lining systems, according to the OEM.

These abrasion- and impact-resistant rubber compounds have been developed with advanced technologies by the Weir Minerals’ team of expert engineers and material scientists who are continually refining Vulco rubber products to keep them at the forefront of mill lining systems technology, the company says.

Extensive field research, compound testing and site trials were conducted to ensure it was not only able to withstand severe abrasion in typical mill system applications, but that it is best in class, the company said.

“In fact, it has been the most wear-resistant rubber compound that Weir Minerals has ever developed for mill lining applications,” Weir Minerals said. “The R67 compound boasts a high hardness, elongation, tensile and tear strength, and is suitable for lifter bars, head/shell plates and grates. When it’s utilised in conjunction with metal cap mill liners, the result is a versatile, economical and efficient product that weighs up to 50% less than steel alone.

“The added benefit is a lighter product that’s faster, easier and safer to install.” 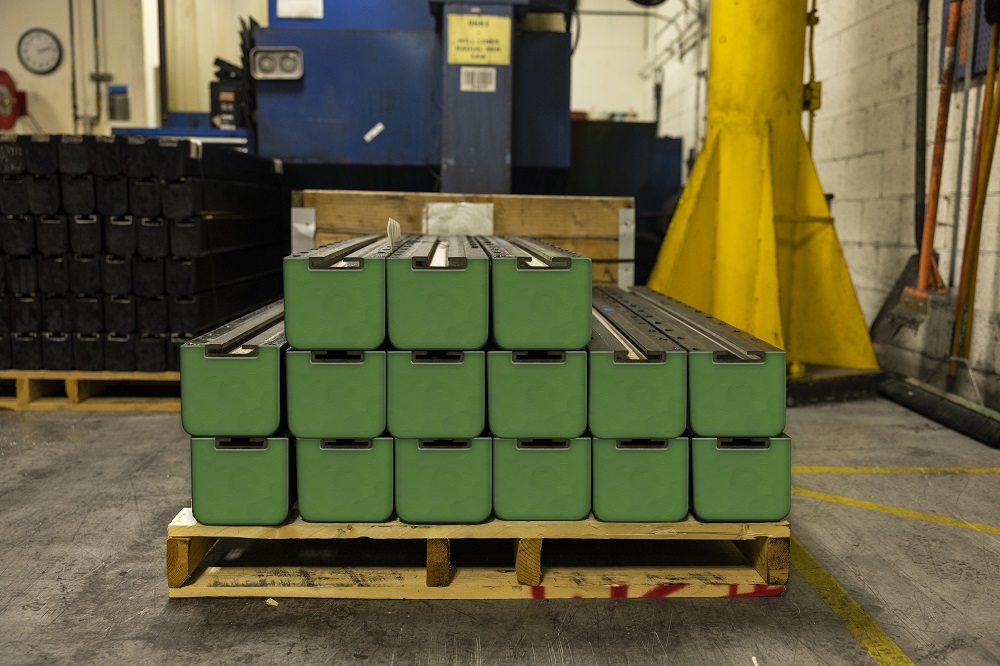 Since its launch in 2018, many mining operators from around the globe have implemented the R67 compound into their mill lining systems, according to Weir Minerals. They have reported as much as 20-40% improvement in wear life, which is resulting in fewer mill lining replacements and longer mill campaigns. This reduction in shutdowns has a dual benefit of increased cost savings and improved plant availability.

With a liner that can run significantly longer, operators have experienced a wide range of benefits including:

Extensive global trials and commercial installations in the market have resulted in several successful outcomes across a variety of different grinding applications.

As an example, a high-grade nickel and copper mining project in the US had a problem where the liners in one ball mill were wearing out too quickly, leading to continued downtime and reduced processing. The operation was looking for a product significantly superior to the elastomer it was using. Initially there was reluctance from the mine, as it had loyalty to its original mill supplier, however after Weir Minerals conducted a series of trajectory simulations and discrete modelling – to optimise the design and deliver the best process performance for the mill – it agreed to trial the R67 liners.

At the end of the trial, the R67 showed 30-40% better performance than the incumbent liners and the customer installed a full set of R67 liners in its mill.

Another trial in the US took place in an iron ore mine with several dozen ball mills in operation. Here, Vulco R67 liners delivered a 17% increase in life compared with the failed shell plates from the mine’s original mill lining system supplier. The company has since installed a complete shell liner in its ball mill.

Moving to Chile, a copper mine was keen to trial the R67 compound to see if it could improve the wear time of a competitor rubber liner. After a three-month trial, all liners were physically measured showing the Vulco R67 liners fully worn wear life projected from the actual wear would be 80% longer compared with the incumbent liners.

Another copper processing plant in Chile trialled R67 composite liners in its SAG mill against two other compounds commonly used in the industry. After 12 months, there was a 48% and 62% wear life improvement on the other liners – proving the R67 composite liners could withstand the highly abrasive environment.

Vulco R67 mill liners are made exclusively at Weir Minerals facilities in North and South America, Australia and South Africa, with plans to expand production into more regions in the future.

“Our strong analysis capabilities in the design process – including discrete element analysis (DEM) and finite element analysis (FEA) – allow us to continuously evolve the application of our composite liners,” Sam Hearn, Global Sales and Business Development Manager at Multotec, says.

Hearn highlights how Multotec uses DEM software to simulate the interaction between the mill charge and the liners, and to evaluate liner profile over the life of the liner.

“The DEM analysis considers a range of variables such as the ore’s bond work index, its specific gravity, the size of the grinding media, the mill speed and the slurry density,” he says. “Sophisticated simulation capability allows us to accurately model the performance and wear of our mill liners. This includes predicting the liners’ wear life, to avoid unscheduled downtime and to extend the time between replacements.”

Emphasising that no two mill liner applications are identical, Hearn says this simulation can guide very specific refinements in the liner design for each customer. A detailed understanding of the operating conditions is vital to ensure that the final solution delivers optimal results.

He notes that the traditional use of steel liners in large SAG mills presents a number of challenges. For instance, there may be bending stress inside the steel liner due to inexact fitting on the mill’s curved surface, and the higher rigidity of steel, compared with rubber, makes it less than optimal for absorbing the energy of rock material inside the mill.

“This is where our composite liners come into their own,” he says. “These innovative liners combine the impact resistance of Hardox 500 steel inserts and the absorption capacity of our specially formulated wear-resistant rubber compound. Through the simulation, the structural integrity of the liners can be verified, while the geometric layout of the liners can be optimised.”

The composite liners are locally manufactured at Multotec’s extensive facility in Spartan, Gauteng, South Africa, in an advanced process that includes its unique submerged cutting technique to preserve the surface hardness of the liners.

“We combine our innovative design capacity with the latest tooling capability and production technology for large-scale manufacture,” Hearn says. Following the design and manufacturing process, Multotec conducts field trials to compare with the relative performance of composite liners and steel liners.

“We are confident that, given our product improvement processes and simulation ability, the wear life of our liners will achieve and often exceed expectations,” he says.

FLSmidth says it has launched redesigned mill lining components engineered to suit the specific functions and differing operating environments of the mining industry with its.

The new PulpMax™ mill liners are designed to increase the throughput of semi-autogenous (SAG) mills and substantially boost the wear life of liners, the company said.

With lighter weight mill liners, installation is faster and safer as each liner is easier to manipulate, according to the company. There are also fewer parts, and, hence, fewer movements are required to perform a reline, resulting in a significant decrease in scheduled downtime.

The composite nature of the liner reduces its weight by almost 50%, according to FLSmidth, which allows the plant to increase its ball charge level without increasing the total weight of the mill.

This higher ball charge further contributes to the higher throughput.

“The lighter weight of these liners has an important impact on size, design and installation time,” the company said. “Each liner can now be larger – subject to the size of the mill opening – and the mill can be lined with fewer of them, reducing the downtime required to conduct replacement.

A lighter liner means fewer bolts to hold it in place, a factor further reducing installation time, according to the company. This shorter downtime also means less time for contractors inside the mills, leading to a faster and safer liner changeout.

Another important benefit of the composite material used in many of FLSmidth’s redesigned liners is it is not necessary to torch the liners, as is sometimes required when removing old steel liners, the company said. “This torching process in the mill is best avoided, as it can cause costly damage to the mill shell,” FLSmidth explained.

Finally, there has also been the development of composite material shell liners bolted from the outside of the mill, once again, speeding up installation and reducing risk.

Jack Meegan, Product Line Manager for Comminution at FLSmidth, said: “As mines increasingly recognise the positive financial impact derived from just a few more percentage points in throughput improvement, many are looking beyond conventional steel cast liners for mills. FLSmidth’s innovations, based on combinations of steel, rubber and ceramic components, allow the liners to be thinner, resulting in a larger volume inside the mill, making higher charge levels possible.”

He continued: “Responding to the continuous assessment of customer needs, FLSmidth has launched a mill liner solution based on extensive data on mill operations, shutdowns, wear profiles and other factors. These have been used to develop a high-end technical and financial solution.”

Following installation, an ongoing measurement of actual wear, tonnage processed and estimated wear life is conducted so further recommendations can be made to improve performance, Meegan explained.

Just over a year since launching its SAGwise™ total process control solution for semi-autogenous (SAG) mills, FLSmidth is putting some savings statistics behind the sensory and process optimisation system.

SAGwise is designed to optimise the use of the three main consumables in SAG milling: power, media and liners.

Winston Mokoena, Key Account Manager at FLSmidth, said the solution reduces critical impacts inside the mill by up to 45%. This adds life to wear liners and grinding balls, helping to prolong liner life between maintenance and giving mills more uptime, he added.

“SAGwise can improve mill production by 6% and substantially reduce process variability,” Mokoena said. “This ensures that the mill provides a constant and optimal feed to the next stage of the process, effectively facilitating better performance of downstream operations.”

Among the challenges mill optimisation tries to address is too little material in the mill, or too much. Too little leads to critical impacts between the grinding media and the mill liners, damaging both elements without producing value. If the mill is overfilled with mined material, on the other hand, this results in grinding inefficiencies.

“The SAGwise system uses four or eight unidirectional or bidirectional audio sensors located in close proximity to the mill, which detect the analogue sounds and convert them into digital signals for analysis by a processing unit,” FLSmidth said. “This unit uses the sound patterns and other process variables to determine the necessary adjustment to the mill’s feed, speed and pulp density.”

So direct are the improvements that can be achieved by this solution that customers can pay back their investment in less than six months, depending on the commodity value and the specific mill environment, according to FLSmidth.

“The parameters that are monitored by SAGwise include the mill’s power consumption, load impacts, mill load and pulp density,” Mokoena said. “The system then responds to these parameters by controlling the mill speed, the feed rate and the water to achieve the ‘sweet spot’ where the mill runs at optimum efficiency.”