Commencing from July 2022, with revenue of A$1.7 billion ($1.2 billion) over eight years, this contract marks Thiess’ return to Central Kalimantan.

Thiess Executive Chair & CEO, Michael Wright, said: “We’re excited to work with our new client who shares the same passion for sustainable mining practices and outcomes as we do.

“This new contract is an opportunity to continue our record of delivering excellence for our clients in Indonesia, with a clear focus on safe, responsible production and industry leading rehabilitation.”

“We look forward to working together with our client and the local communities to deliver long-term social, environmental and economic value.”

A day earlier, Thiess confirmed that its mining services contract at Peak Downs Mine in Queensland, Australia, had been extended for another five years by BHP Mitsubishi Alliance (BMA).

Located southeast of Moranbah, Peak Downs is an open-pit mine producing high-quality steelmaking coal and is one of Australia’s largest mines by recoverable coal reserves.

Under the contract, Thiess will continue to operate and maintain mining equipment to move additional overburden at the mine and support BMA’s production requirements over the next five years. Starting from July 2022, revenue to Thiess is worth over A$700 million.

The depth is a record for the Terrier rig, according to Dando.

Heritage Minerals is currently working on the historied Mount Morgan mine in Queensland, Australia. One of Australia’s oldest mines, Mount Morgan was active from 1882 through to the 1980s. In the process, tens of millions of tonnes of tailings were generated.

Heritage Minerals is employing innovative processing technologies such as ReCYN, developed by partner GreenGold Engineering, to clean pollutants from the tailings and returning them to safe land.

It was this technology and the tailings recovery aim IM recently focused on for an in-depth article on Mount Morgan.

“Foremost, the unconsolidated geology of tailing fines is very hard to sample with conventional rotary equipment,” it said. “The Terrier’s Duplex Sampling System, which is driven into the ground by a 64 kg anvil and simultaneously cases-off and samples, provides excellent recovery in this type of unconsolidated geology for metallurgical and in-situ density measurements.” 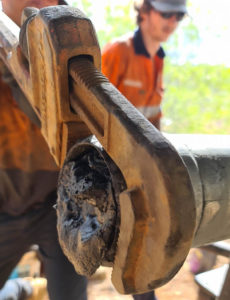 Charlton proved and refined the drilling method he used in the mineral sands of Kalimantan, Indonesia, where he sampled alluvials to over 20 m for lab analysis, Dando says. This is an impressive feat for a rig that has a large user base for geotechnical sampling, standard penetration testing and dynamic probe testing, most often at depths of less than 15 m.

More than doubling this to 45 m was no easy task, Charlton explained: “At depth, it took almost 10 minutes to trip the drive rods and retrieve the sample, but the quality of the sample and the economies in terms of cost per metre offset the sometimes slow drilling.”

Heritage has recently purchased a second Terrier rig from a Dando customer in Australia and Charlton has made some modifications to the design to facilitate drilling beyond the original specifications of the rig.

“We’ve fitted a permanent casing extractor to help pull sample tubes and casing if they get stuck, as well as modifications to assist with tripping rods more quickly,” he said.

To achieve these depths, the team are using a reaming method whereby they sample using an 86 mm windowless sampler tube, and then ream out using a larger 116 mm tube before returning to the 86 mm sampler to continue. This reduces frictional forces along the side of the borehole and abrasive tailing materials, according to Dando.

The percussive hammer system allows sampling without flush, minimising the need for cumbersome mud tanks or air compressors while preventing contamination of the sample or the environment, it added.

CIMIC Group subsidiary, Thiess, says it has secured a A$172 million ($121 million) contract extension from Bayan Resources to expand operations at the Melak coal mine in East Kalimantan, Indonesia.

Under the 12-month extension, which takes the contract out to 2023, Thiess will increase coal production and overburden removal and continue to provide additional mining services, including drill and blast, and coal loading to the barge facility, it said.

CIMIC Group Mining and Minerals Executive and Thiess Managing Director, Douglas Thompson, said: “I’m pleased to be continuing our relationship with Bayan Resources and extending our operations at Melak where our team has delivered exceptional technical solutions for almost 10 years.”

In 2008, Thiess was awarded a contract to develop and operate the Melak greenfield coal mine. The mine is divided into the two different mine concessions, Teguh Sinar Abadi and Firman Ketaun Perkasa.