Appian Funds is offering miners short term, flexible financing solutions to help them navigate the choppy markets that have come about as a result of the spread of the COVID-19 virus.

The private equity firm’s solutions, which include credit facilities, are aimed at helping support mining companies with near-term balance sheet pressures and liquidity concerns, it said.

Appian explained: “The spread of coronavirus has had a profound impact on people’s lives, economies, commodity prices and financial markets worldwide. Although the full impact is not yet clear, Appian is monitoring the situation closely.

“Our first priority is the safety of our people. Our operations around the globe have implemented measures to protect employees, limit the spread of the virus and assist local communities. We will keep these arrangements under review as the situation evolves and will continue to assess how we can play our part in the response.

“We are also conscious that the broader mining industry is already under pressure. There has been a demand shock and prices have fallen. Restrictions on the movement of people have forced companies to change working patterns. Supply disruption could increase further if the virus spreads to key commodity producing regions in Latin America and Africa.

“It is precisely in times like this that long-term capital and through-the-cycle thinking are required to support high quality businesses and management teams.”

To address the challenges presented by COVID-19, Appian said it was expanding its focus and was ready to provide short-term, flexible financing solutions across the capital structure, including credit facilities. This comes on top of its usual direct equity investments.

“The long-term nature of the Appian Funds’ capital base and the flexibility of Appian’s investment mandate allow us to support partners within the range of $50-$300 million of financial support, including equity, bridge loans and other forms of credit,” it said.

Appian has investment experience in both development assets and operating mines across a range of commodities and jurisdictions, with a current portfolio including base, precious and specialty metals in Latin America, North America, Australia and Africa.

“We remain constructive on the medium and long-term outlook of the sector and look forward to continuing our engagement with industry participants world-wide,” it concluded.

The transition to a low-carbon economy, access to resources and new ways to finance mining are just some of the drivers the World Economic Forum’s (WEF) Nicolas Maennling and Perrine Toledano believe will shape the future of the mining and metals sector.

Maennling and Toledano, co-curators of the WEF’s Transformation Map on Mining and Metals, said the industry was recovering from one of its most difficult periods in decades, with market volatility and a downturn in commodity prices creating “a new normal” where cost cuts, automation and operational efficiency are vitally important.

“While we believe that demand for minerals will grow in the coming years, there are several trends that will determine which types of mining companies will prevail in the future.”

The two then went on to spell these seven out.

Transition to a low-carbon economy

“Demand for most minerals is projected to be high in order to achieve the energy transition. While fossil fuels have helped to improve living standards around the world since the 18th century, their associated greenhouse gas emissions have led to global warming. In order to avoid reaching temperatures that will have catastrophic consequences for the planet, countries must decarbonise their energy systems by the middle of this century,” they said.

“Given that low-emission energy and transportation systems are more mineral-intensive than their fossil fuel-based counterparts, the transition provides a great opportunity for the mining sector. At the same time, the mining sector will have to reduce its own emissions. Mining companies that power their operations with renewable energy, operate electric or hydrogen-powered truck fleets and integrate recycling in their value chains will be best placed to sell low-carbon premium minerals.”

“Automation and digitalisation will result in more targeted and efficient mining, which could further be enhanced through technological breakthroughs in areas such as in-situ leaching (a mining process used to recover minerals such as copper and uranium through boreholes drilled into a deposit), block caving (an underground mining method that uses gravity to exploit ore bodies located at depth) or bio mining (a technique for extracting metals from ores and other solid materials typically using prokaryotes or fungi).

“Mining jurisdictions with higher perceived risks may see increasing levels of interest from investors. In the search for high-grade ore deposits, deep sea and asteroid mining will be increasingly explored by governments and companies. While these technologies will open up new ways for mining companies to optimise the valorisation of existing resources or allow access to new ones, they are unchartered territory in terms of business models, processes, and potential social and environmental externalities.”

“As mining companies try to limit risk, novel financing and production models will become more common. After demand from China triggered a commodity boom in the first decade of the 21st century, prices collapsed and mining companies were forced to focus on reducing debt ratios and improving their balance sheets. Alternative financing solutions were developed such as royalty and metal stream agreements that reduce the burden on mining companies’ balance sheets,” Maennling and Toledano said. 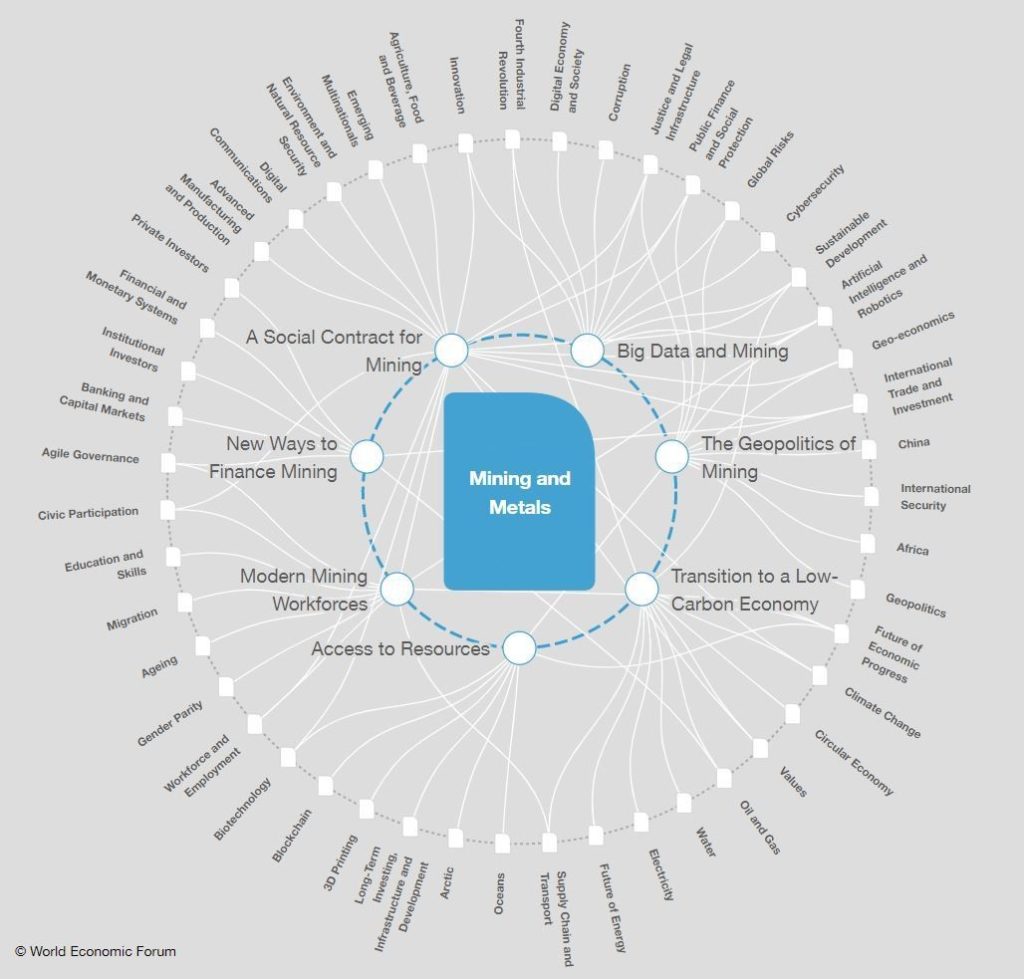 “To spread the risk of new capital-intensive projects, these financing solutions are likely to continue to grow. Companies may also seek to develop joint ventures similar to those observed in the oil and gas sector in order to reduce their exposure to a particular project or jurisdiction and may also consider service agreements.”

A social contract for mining

“Creating real benefits for communities near mine sites will be key for successful new projects. Obtaining the ‘license to operate’ from local communities has been a challenge for the mining industry in recent years. Many proposed projects have been rejected, and operations have been disrupted by protests,” they said.

“With a record number of mines nearing the end of their life and insufficient money being set aside for remediation; with new mining projects increasing the sector’s footprint without necessarily providing additional employment opportunities at the local level due to automation; and with increased water stress and extreme weather events due to global warming: local opposition to mining is likely to increase if no new business models are developed that benefit the affected communities.”

“Data transparency to aid the mining industry’s relations with stakeholders. Collecting and processing massive amounts of data will be essential for mining companies as they digitalise and automate their operations. What data should be shared and made transparent will continue to be a major area of debate,” they said.

“Governments will seek to further push for disclosure of subsidiary structures to address tax base erosion; consumers will seek to increase value chain transparency; investors will use the proliferation of non-financial data to better assess the risks of their mining portfolios; civil society will continue to push for companies to go beyond the mandatory EITI Standard; and impacted communities are particularly interested in accessing data that capture the externalities that affect them.

“It will be key for companies to work together with other stakeholders in order to understand the types of data that should be made available and the appropriate format that data disclosure should take, in order to ensure standardization, usefulness and impact.”

The geopolitics of mining

Maennling and Toledano said: “Mining companies must navigate rising geopolitical risk and economic protectionism. A growing popular resistance to globalisation and free trade is altering politics, and directly affecting the mining and metals sector. Policymakers in mining jurisdictions are increasingly trying to enact local content laws and regulations which require minerals to be processed before they are exported.

“At the same time, import restrictions on semi-finished products such as steel and aluminium are at the centre of recent trade disputes. Trade wars and increasing protectionism are likely to dampen global commodity demand and disrupt the value chain of mining and metals companies. In the ‘critical minerals’ sector, which is central to high-tech and future-oriented industries, this trend is further complicated by market consolidation in the hands of a few players.

“Further consolidation, geopolitical manoeuvring and muscle-flexing could create challenges for companies that have so far prospered under a system of relatively free trade – while creating opportunities for domestic projects that might not be economically viable without government intervention.”

“Maintaining an open dialogue will be key as mining companies try to revamp their employee base. Constantly evolving technologies and business models will require mining company employees to develop new skills. The sector will have to increasingly compete with the IT sector to attract top talent from universities in order to drive its digitalisation and automation processes. Governments and companies will have to work together to help transition workers that cannot be absorbed by an automated mining sector to new activities through retraining and transitioning programmes,” the authors said.

“The speed at which mining companies will be able to rollout new technologies at their mine sites will be closely linked to the host government’s and labour unions’ acceptance of reduced employment and procurement opportunities. As such, these actors need to be involved in the decision-making around the transition and in strategizing policies to support those who will be negatively affected.”

Teck Resources has approved construction of the Quebrada Blanca Phase 2 copper project in the Tarapacá Region of northern Chile after Sumitomo Metal Mining (SMM) and Sumitomo Corporation agreed to help fund the development in return for a 30% indirect interest.

The transaction with SMM and Sumitomo Corp will see the two companies pay $1.2 billion for a 30% interest in Compañia Minera Teck Quebrada Blanca SA (QBSA), which owns the QB2 project. This will be comprised of an $800 million earn-in contribution and a $400 million matching contribution. On top of this $50 million will be paid to Teck upon QB2 achieving an optimised target mill throughput of 154,000 t/d by December 31, 2025, subject to adjustment.

Don Lindsay, President and CEO of Teck, said QB2 was one of the world’s premier undeveloped copper assets, with this transaction further confirming the value of the project.

“This partnership significantly de-risks Teck’s investment in the project, enhances our project economics and preserves our ability to continue to return capital to shareholders and reduce bonds currently outstanding.”

The mine is expected to use “demonstrated industry-leading technology to enhance safety, productivity and sustainability, including an integrated operations centre located in Santiago, autonomous haulage fleet, and the first large-scale use of desalinated seawater in the Tarapacá Region to eliminate freshwater use in operations”, Teck said.

The company added that it was positioned for project construction with a strong and experienced execution team in place, major permits in hand, engineering nearly 80% complete, and contracting and procurement well advanced.

Lindsay said: “QB2 will be a long life, low-cost operation with major expansion potential, including the option to double production or more, to become a top-five global copper producer.”

This expansion potential is expected to be shown off with the completion of a scoping study to assess QB3 development options.

The social and environmental impact assessment for the QB2 project was approved in August and early field work commenced in September.

The project scope includes the construction of a 143,000 t/d concentrator and related facilities, which are connected to a new port and desalination plant by 165 km concentrate and desalinated water pipelines.

Teck has agreed with SMM and SC to cover their share of the cost of power under the existing power purchase agreements in excess of QBSA’s needs until the earlier of the startup of the first grinding line in the mill or September 30, 2022. The target date for project completion and the start of commissioning and ramp up is the December quarter of 2021. Full production is expected in the middle of 2022.

The project will build on the existing Quebrada Blanca copper mine, which produced 23,000 t of copper last year and is expected to stop producing cathode in mid-2019 as the supergene deposit is exhausted.

After the transaction is completed, the ownership of QBSA will be as follows: 60% Teck, 30% SMM/SC, 10% Enami.