Exyn Technologies has unveiled what it says is the world’s first real-time colourised point cloud visualisation on a handheld LIDAR scanner, the ExynPak™.

This accomplishment marks one of Exyn’s many contributions to autonomous robotics across several industries including mining, infrastructure inspection and construction, it said.

Even in its early beta phase, ExynPak users can capture precise, colourised 3D models 20-30 times faster than a traditional stationery tripod or terrestrial scanner, according to the company. Powered by ExynAI™, the ExynPak ‘drapes’ real-time RGB information captured through two hemispherical fixed cameras onto point clouds created by a gimballed Velodyne LIDAR Puck LITE, providing operators a complete colourised 360º view of their environment.

Coming with a three-hour battery life, the ExynPak is capable of capturing dozens of scans in a single shift with a real-time feed ensuring maximum coverage, Exyn said. And further refinement through Exyn’s proprietary post-processing pipeline, ExSLAM, can correct drift to circa-0.1% per distance travelled.

Jason Derenick, CTO, said: “We’ve seen photogrammetry and other post-processed LIDAR scans colorise point clouds through photos and/or RGB data, but this is the first time colourised point clouds have been streamed to an operator in real time. Even in its BETA phase, we’re thrilled with what the team has created.”

The untapped potential of high-fidelity, precise 3D models has already revolutionised workflows in geological studies (mining) and will continue to revolutionise workflows in construction, reality capture, digital twinning, industrial inspection and more, according to Exyn. Equipped with a colorised ExynPak, a one-to-two person surveying team will be capable of capturing entire structures, tunnels and GPS-denied environments in a matter of hours, rather than days or even weeks.

Nader Elm, CEO: “The ExynPak is a powerful new tool with broad applications in many ‘physical’ industries such as construction, infrastructure development and inspection, mining and much more. You can set it down, initialise and begin capturing a realistic 3D model of your environment in minutes and with minimal training.”

Exyn Technologies has announced the expansion of its strategic partnership with Sandvik Mining and Rock Solutions to integrate its data into Sandvik’s analytics and process optimisation suite, OptiMine®.

By synthesising critical data and capabilities, Exyn and Sandvik are helping mining customers transform their underground operations to be safer, more productive and more efficient, the companies say.

Back in July, the two companies signed an agreement to work together “to provide efficient solutions for mapping and visioning underground mines, which will make a substantial difference when it comes to mine locations that are hazardous, hard to reach or conventionally time-consuming to survey and inspect”.

The partnership allows mining customers to benefit from comprehensive underground aerial 3D mapping with progressive visualisation that increases overall transparency of mining operations – including for GPS-denied, hard-to-reach, or hazardous areas, or locations that would be time-consuming to survey and inspect using conventional methods, according to the companies.

Exyn and Sandvik deployed this integrated solution at gold exploration and development company Rupert Resources’ Pahtavaara project in Finland, using the ExynAero drone to autonomously create a 3D point cloud of an underground stope. This 3D data was then uploaded to Sandvik’s OptiMine Mine Visualizer and georeferenced to the CAD mine model for further analysis and visualisation.

David Hallett, Vice President, Business Unit Automation, Sandvik Mining and Rock Solutions, said: “This step in our partnership with Exyn is critical. Our teams have been working closely together to ensure the connection between Exyn and Sandvik’s systems would be seamless and easy for operators to use. When this feature gets rolled out to the market as part of OptiMine, it will allow our customers to analyse Exyn’s high-resolution, aerial maps in OptiMine.

“After this demonstration, we look forward to further developing our partnership and integrating our hardware and software systems in the coming months.”

Nader Elm, CEO and Co-Founder of Exyn Technologies, added: “We’re very proud to expand our partnership with Sandvik and to deliver the key benefits of safety and operational efficiency to all the humans involved in the mining industry.

“By offering world-class software and technology, we have given customers the ability to map areas underground they could never before reach. Our end goal is to be an integral part of fully autonomous mining operations and I’m confident that through our partnership with Sandvik, we’re one step closer.”

Exyn and Sandvik have more product integrations in the plans, they said. 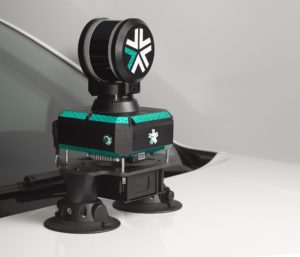 Exyn Technologies says it has completed a successful mission for Rupert Resources at its historic Pahtavaara gold mine in northern Finland.

By harnessing Exyn’s autonomous drones, Rupert Resources was able to produce highly detailed 3D models of the mine, which is otherwise completely inaccessible to traditional CMS tools or even manually piloted drones, Exyn said.

“Rupert Resources needed to plan for a potential restart of operations by estimating tonnage previously removed from the mine, as well as calculating the remaining ore in heavily restricted areas,” the company said.

Exyn’s fully autonomous aerial robots mapped 30 stopes in three days with a single drone. In addition, Exyn mounted a version of its robot to a car to scan all access drifts which, together with the stope maps, provided a complete mine map in under four days.

Jukka Nieminen, Managing Director of Rupert Finland, said: “Rupert is actively seeking new technologies where we think big gains can be made in terms of safety, productivity and accuracy.

“Exyn achieved accurate assessment of the volume of remaining stopes at Pahtavaara with an unprecedented level of detail, and obviously the use of remote technologies means that this was achieved with a greatly reduced degree of risk. We have no hesitation in recommending this technology.”

Exyn’s autonomous drones are built on the exynAI™ platform, enabling aerial robots to fly intelligently without a human pilot using a multitude of high-tech sensors and AI-based software, the company says. The system operates without the need for GPS or external communications, and is deployed as an all-in-one software and hardware package.

Raffi Jabrayan, Director of Markets & Industries, Exyn Technologies, said: “Our mission with Rupert presented some of the most difficult and seemingly impossible challenges to navigating, analysing, and assessing a mine – which therefore makes it exemplary in demonstrating the heights of Exyn’s capabilities.

“Our AI-based software and state-of-the-art sensors were able to get the job done quickly and safely, proving once again that no exploration task is impossible for Exyn drones.”